My solution to the homework 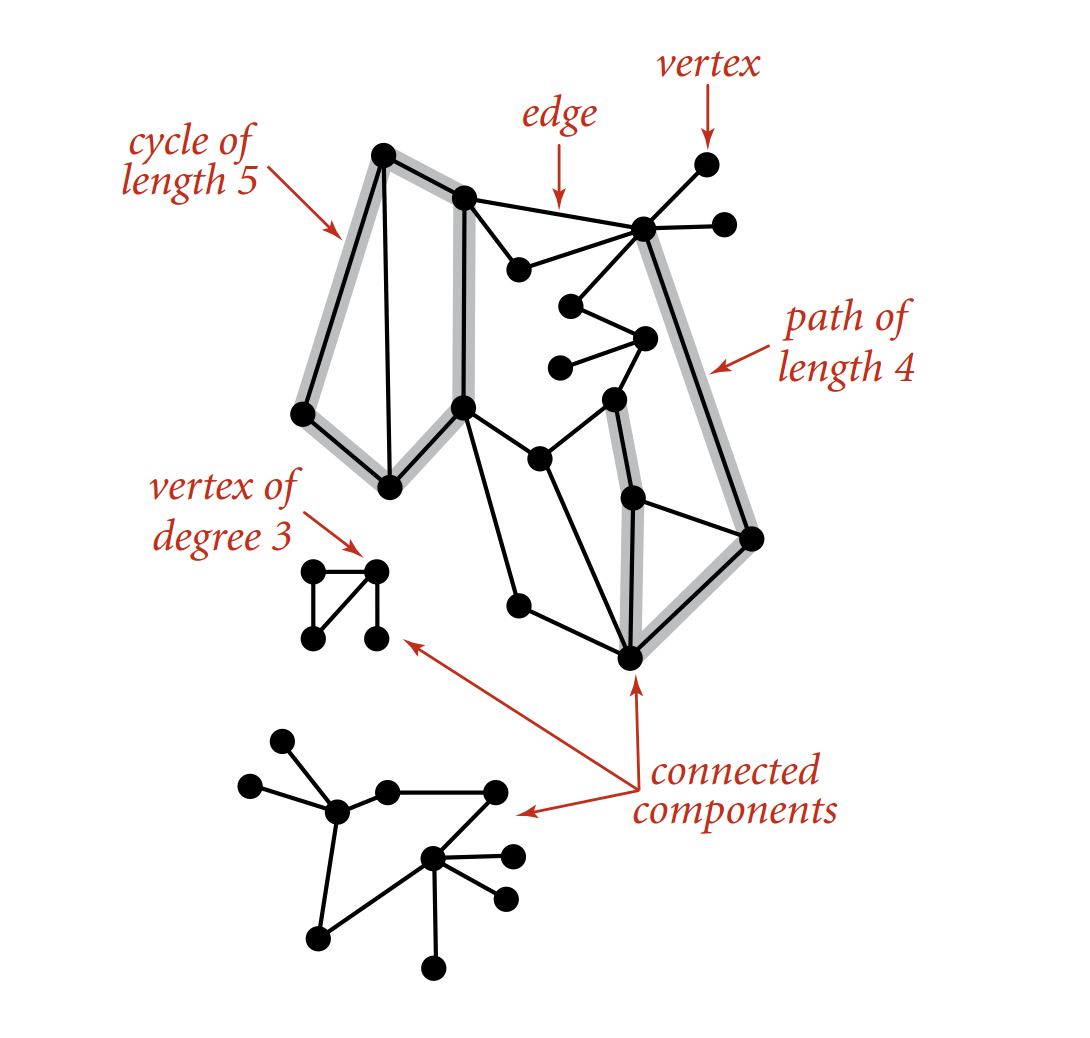 For vertices, convert them between names and integers with symbol table

For edges, we have 3 choices:

In practice, use adjacency lists because

After DFS, can find vertices connected to \(s\) in constant time (all true vertices in marked) and can find a path to \(s\) in time proportional to its length (edgeTo is a parent-link representation of a tree rooted at \(s\)).

BFS examines vertices in increasing distance from \(s\). It can be used to find the shortest path.

Use DFS to partition vertices into connected components, then can answer whether \(v\) is connected to \(w\) in constant time 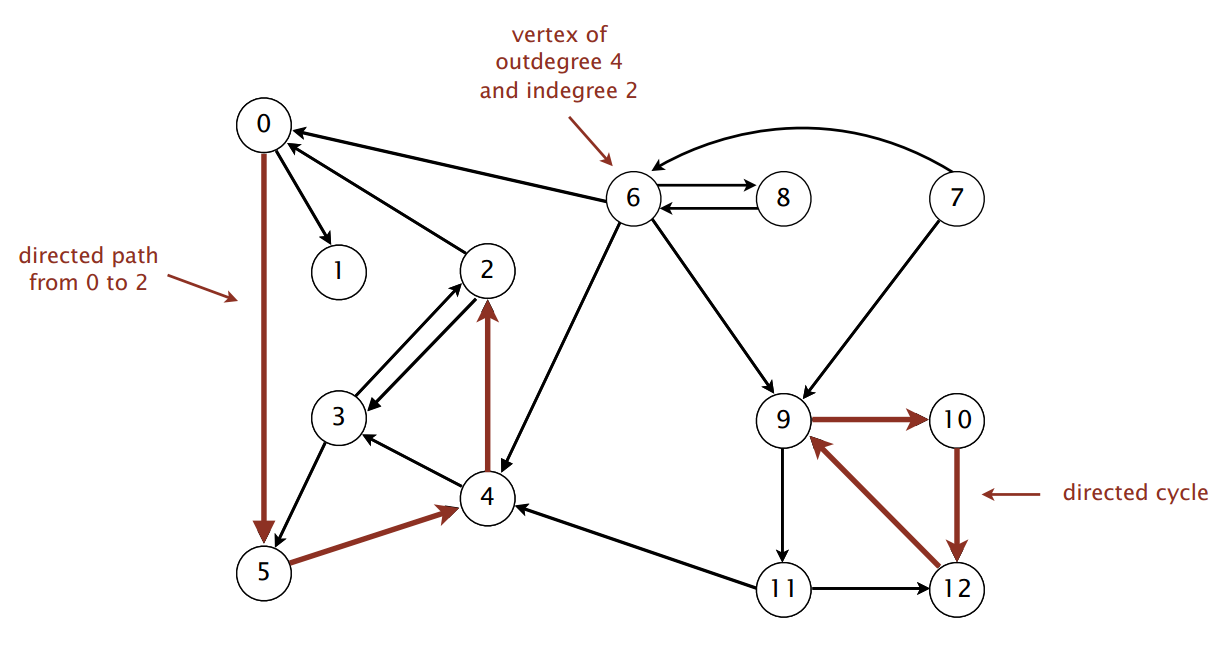 Both DFS and BFS are digraph algorithms, code is identical to undirected graphs.

Precedence scheduling: Given a set of tasks to be completed with precedence constraints, in which order should we schedule the tasks?

Definition: A spanning tree of \(G\) is a subgraph \(T\) that is both a tree (connected and acyclic) and spanning (includes all of the vertices)

Then MST exists and is unique.

Given any cut, the crossing edge of min weight is in the MST.

Efficient implementations: How to choose cut? How to find min-weight edge?

The challenge is how to examine adding edge \(v-w\) to tree \(T\) create a cycle. Use union-find:

Maintain a PQ of edges with (at least) one endpoint in \(T\), where the priority is the weight of edge

Maintain a PQ of vertices connected by an edge to \(T\), where priority of vertex \(v\) = the weight of shortest edge connecting to \(T\)

And we need a IndexMinPQ data structure

Given an edge-weighted digraph, find the shortest path from \(s\) to \(t\).

Different ways to choose which edge to relax:

Prim's algorithm is essentially the same algorithm, distinct in the way to choose next vertex for the tree:

Suppose the edge-weighted digraph has no directed cycles

It is more efficient to get the SPT. Time is proportional to \(E + V\)

Dynamic programming algorithm can be used to compute SPT in any edge-weighted graph with no negative cycles in time proportional to \(E \times V\):

Negative cycle can be found by Bellman-Ford algorithm too: If any vertex \(v\) is updated in phase \(V\), there exists a negative cycle.

Negative cycle application: Arbitrage detection. Given table of exchange rates, is there an arbitrage opportunity?

Seam Carving is a content-aware image resizing technique. Remove one row/column every time.

For this problem, dynamic programming is equivalent to treat the image as a graph and find the shortest path on it.

To compute mincut \((A, B)\) from maxflow \(f\): Compute \(A\) = set of vertices connected to \(s\) by an undirected path with no full forward or empty backward edges. 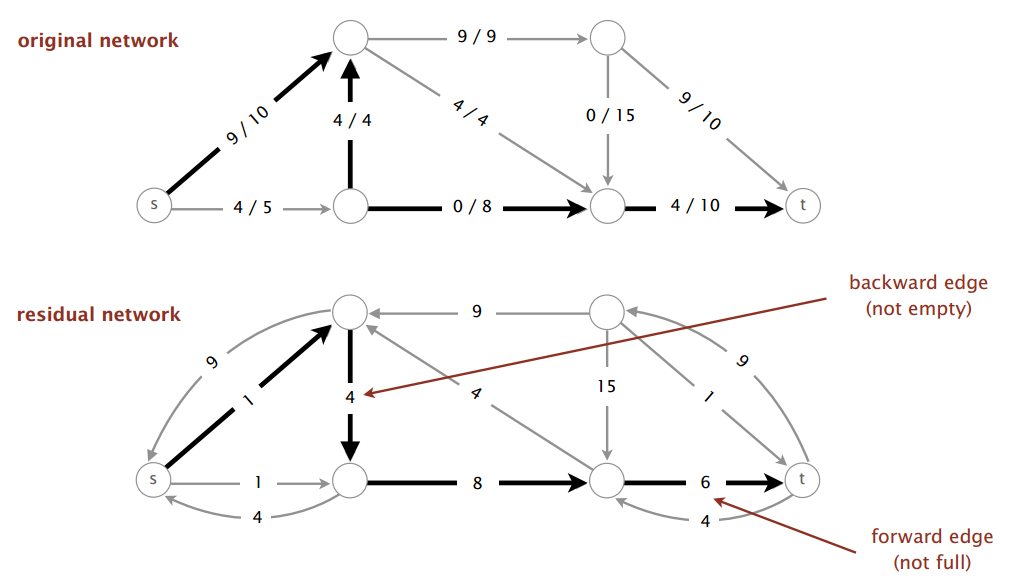 \(N\) students apply for \(N\) jobs, each gets several offers. Is there a way to match all students to jobs?

Equivalent to: Given a bipartite graph, find a perfect matching.

Given each team's current wins and losses, and their games left to play, determine whether team \(i\) can be eliminated (cannot win).

To check whether team \(x\) is eliminated, we consider two cases:

We can do better if we don't depend on key compares.

Problem: Given a text of \(N\) characters, preprocess it to enable fast substring search (find all occurrences of query string context) 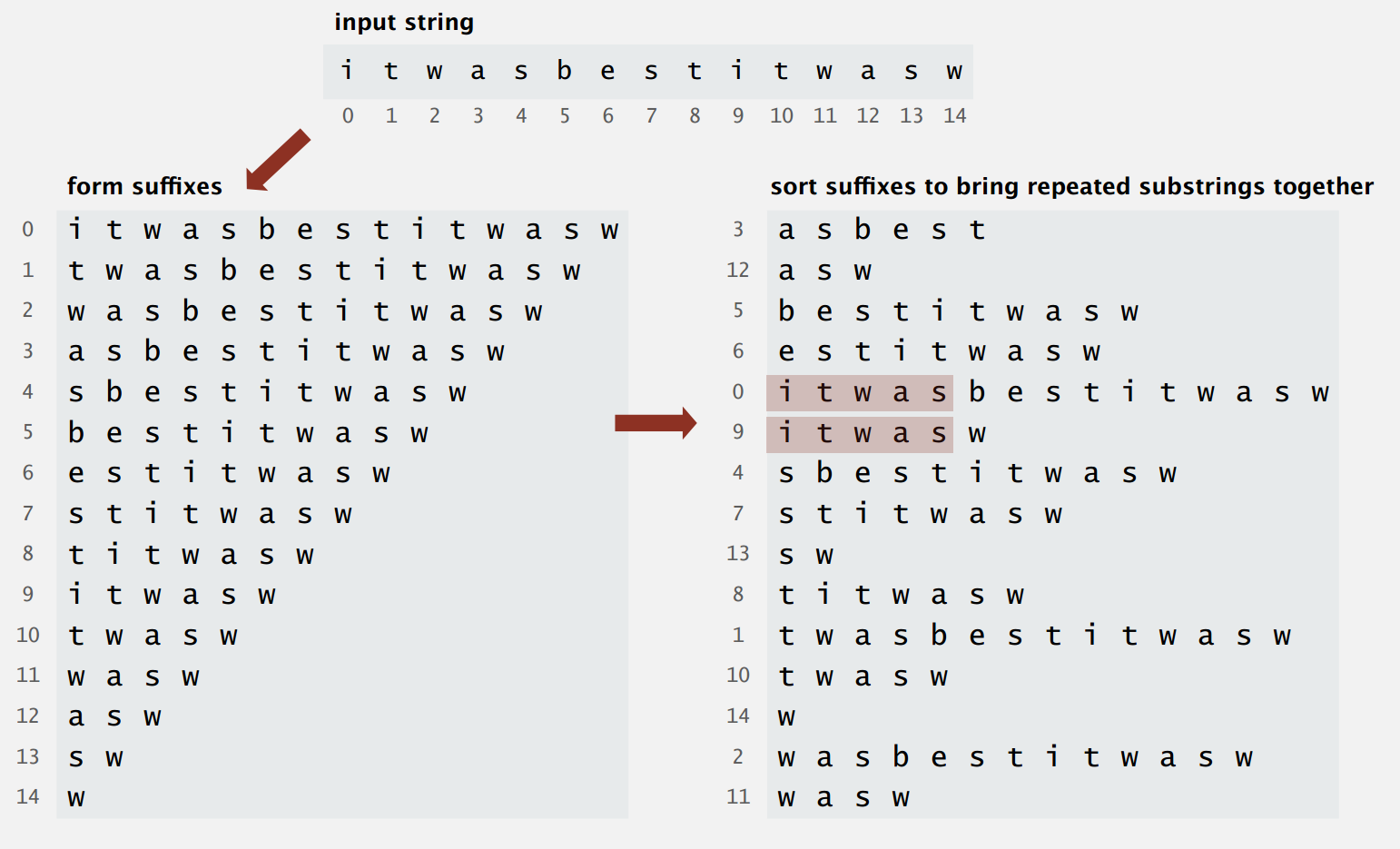 Search: Follow links corresponding to each character in the key

Insertion: Follow links corresponding to each character in the key

Search: Follow links corresponding to each character in the key

Insertion: Follow links corresponding to each character in the key

Brute force: Check for pattern starting at each text position. 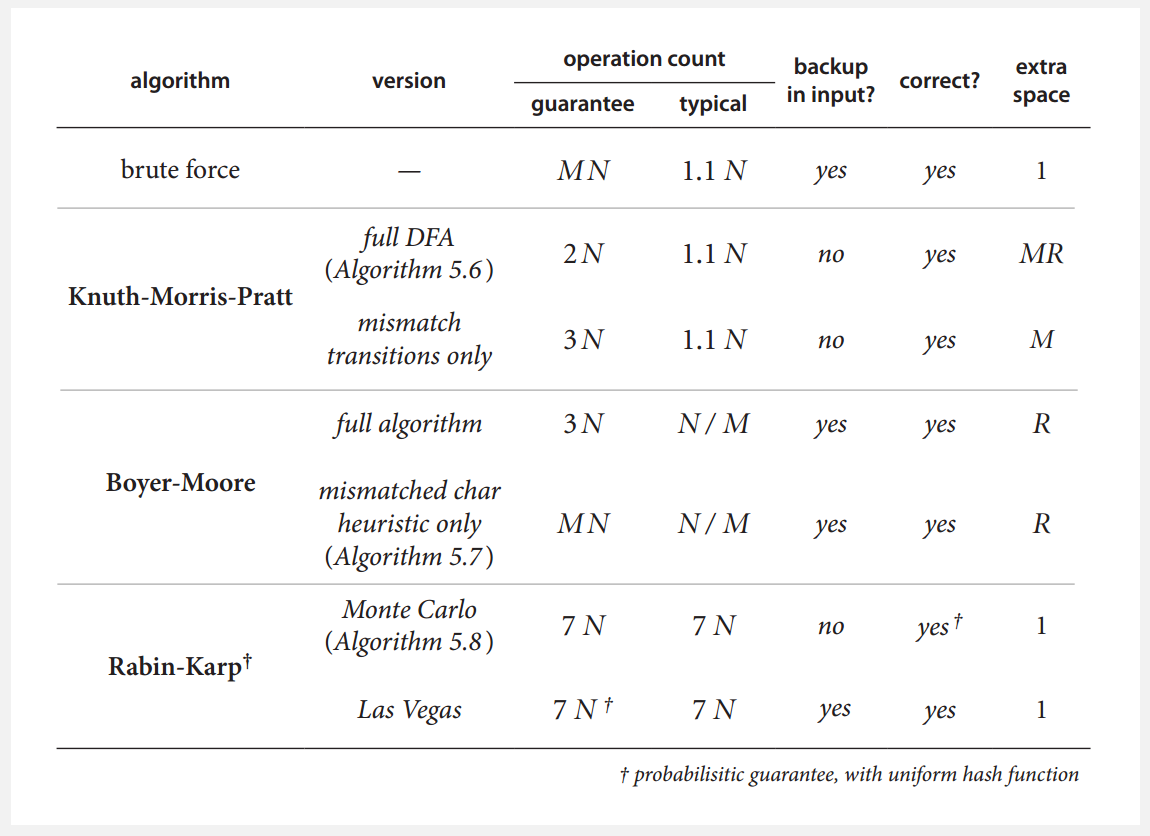 The DFA state after reading in text[i] is the length of longest prefix of pattern[] that is a suffix of text[0:i]

Once we have the dfa matrix, we can use this make transition without backup

Precompute index of rightmost occurrence of character in pattern to decide how much to skip:

Find valid words in a board by connecting characters to its eight neighbors.

The DFA built from RE may have exponential number of states, so instead we use NFA (Nondeterministic finite state automata).

The Nondeterminism comes from different transitions. The program has to consider all possible transition sequences.

Time complexity: Determining whether an \(N\)-character text is recognized by the NFA corresponding to an \(M\)-character pattern takes time proportional to \(MN\) in the worst case. 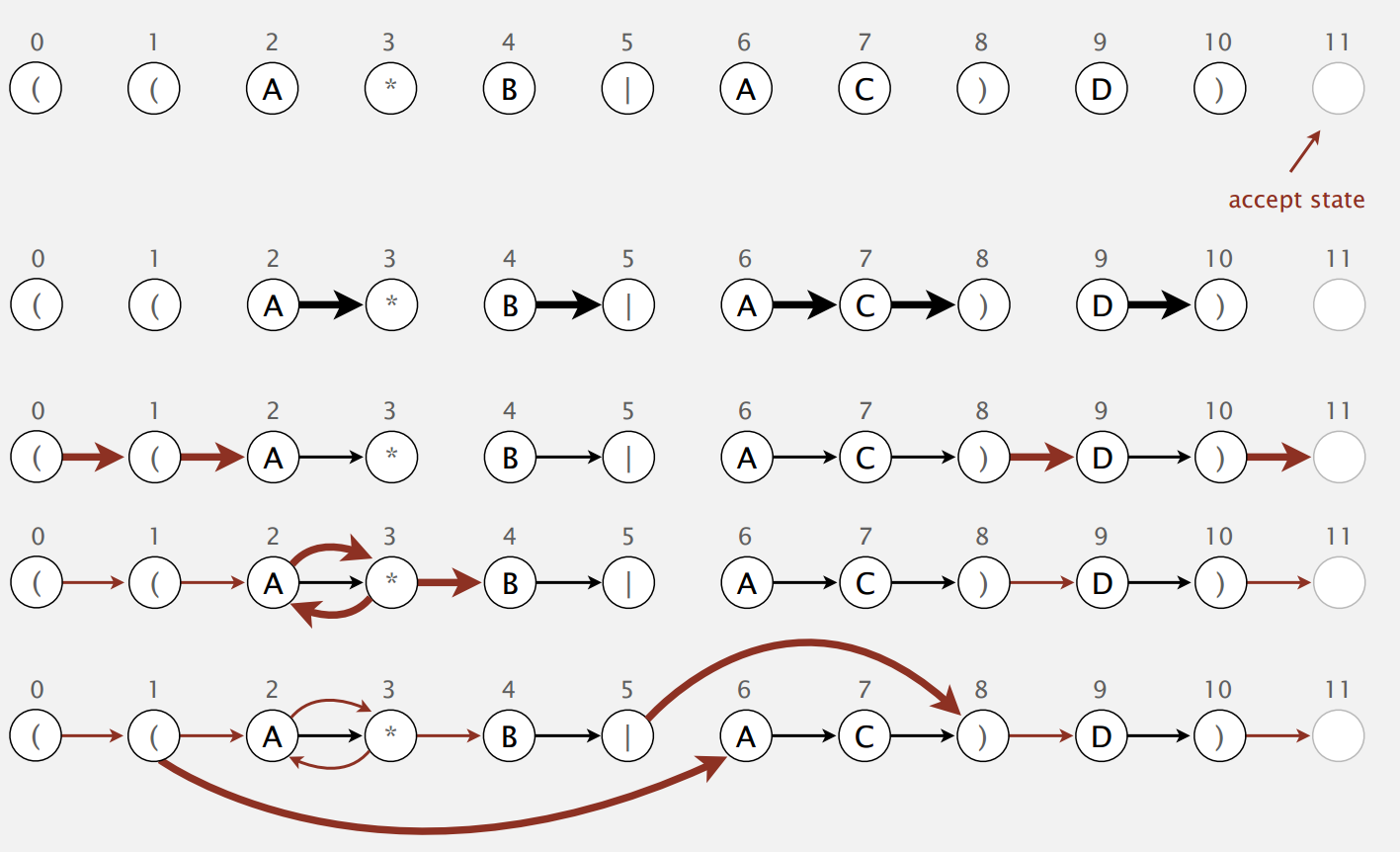 Time complexity: Building the NFA corresponding to an \(M\)-character RE takes time and space proportional to \(M\)

Simple type of redundancy in a bitstream: Long runs of repeated bits

To avoid ambiguity, ensure that no codeword is a prefix of another.

Use binary trie to represent the prefix-free code. 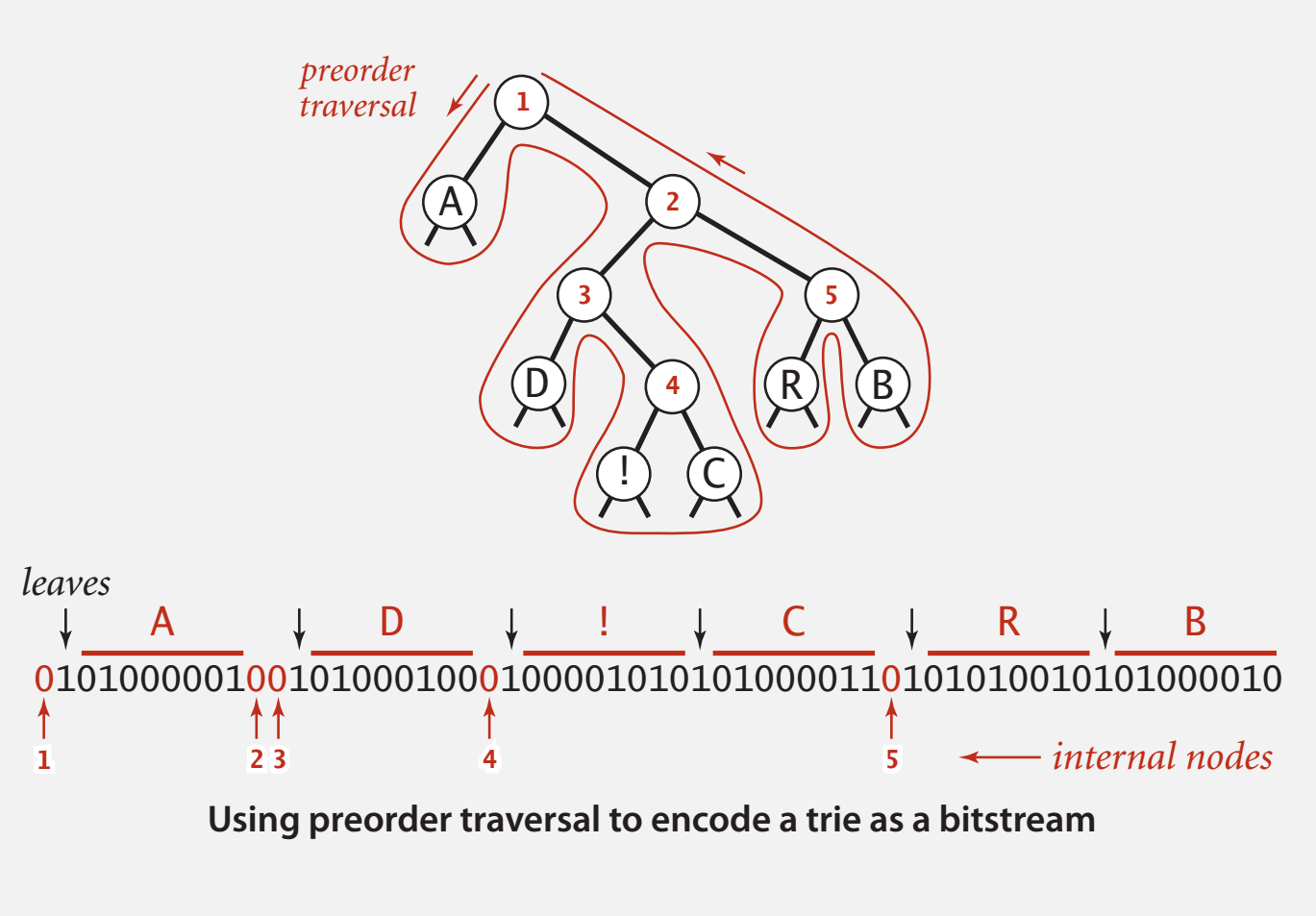 To find the best prefix-free code, use Huffman algorithm: